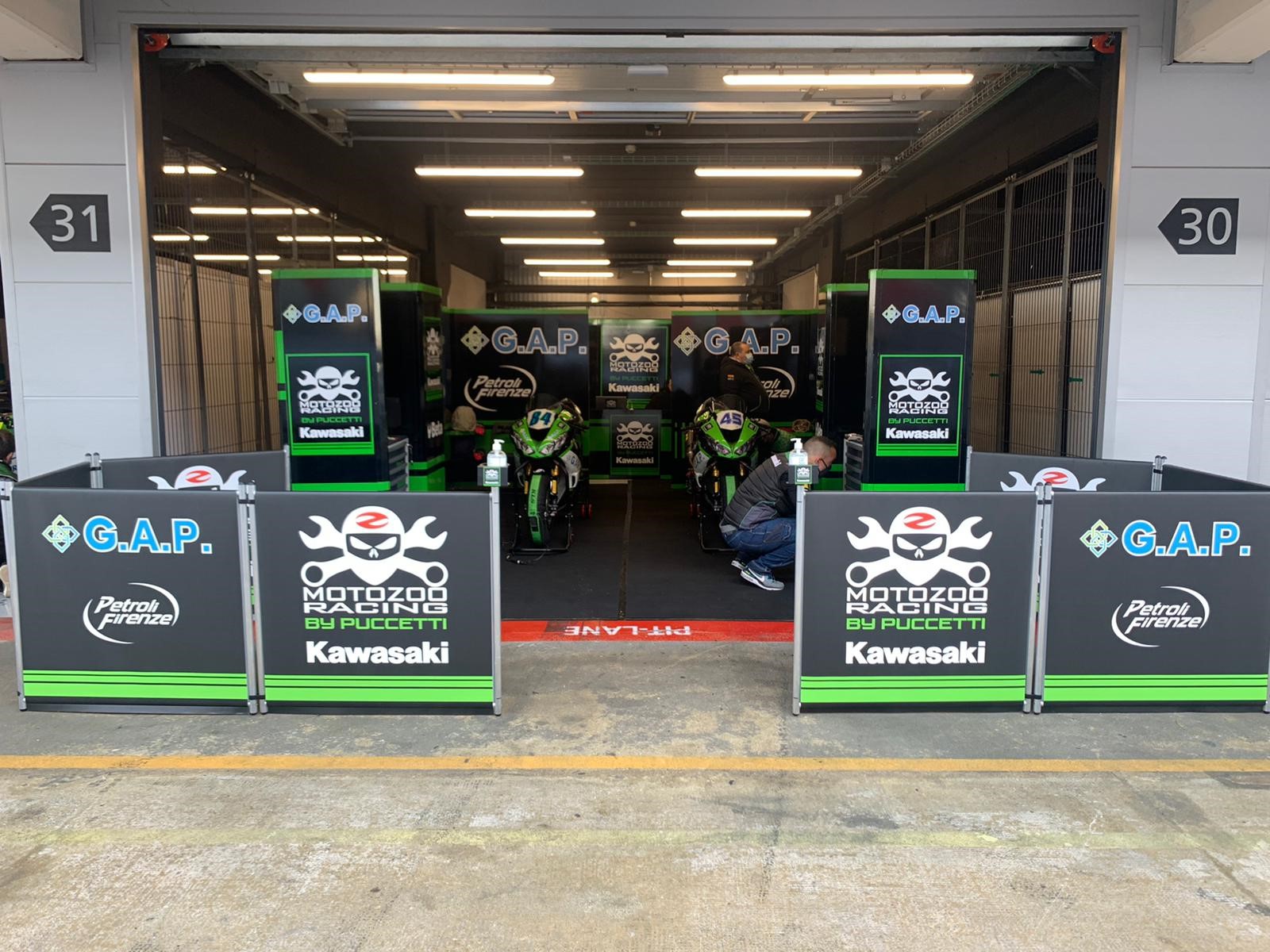 The 2BOX Promo Line modular barriers land in the Supersport World Championship, taking to the track with the Kawasaki ZX6R of G.A.P. Motozoo Racing Team by Puccetti.

This year in the team, there are two important names, Shogo Kawasaki and Michel Fabrizio, one of the great protagonist of these last years in the derivatives of the series, where he gained the Superstock 1000 World Champion in 2003 and subsequently protagonist both in Moto GP and in Superbike riding official bikes such as Ducati (where he was a companion of Troy Bayliss), Suzuki, Honda, BMW and Aprilia.

The 2BOX Promo Line barriers were chosen to be part of the team, in the double-sided graphics with the official Kawasaki colors. They will allow the team of Fabio Uccelli to delimit the pits access areas, both in the pit lane and in the paddock, by allowing, at the same time, a visual communication of great impact. For the happiness of partners and sponsors.

Their lightness and handling have won over the team, who, instead of using the classic belt tensioning columns, heavy and difficult to install, will use the 2BOX Promo Line aluminum barriers. They are Self-supporting and equipped with lots of accessories such as the support plate that makes them even more stable even during windy days. In addition the sanitizing gel holder bracket makes easy the sanification of the staff both in entry and in exit.

The 2BOX Promo Line modular barriers will go around the world and can be stored in a very small space and weight: only 8.0 kilograms for 4 meters length. Thanks to the opportunity to put togeter the panels by using the special joint, they can be adapted to any size of box and for every occasion. A 4-meter-barrier can be turned into 3-meter-one, while a 3 meters lenght can be turned into 4 or 5 meters.

The 2BOX Promo Line barriers are a world innovation, as there aren’t no similar products in the market. They are patented and can be provided in the single-sided or double-sided version, or on the entire available surface. The graphics are made with approved sheets in FIRE REACTION CLASS 1, for the purpose of fire prevention.

For further information, we invite you to visit the website www.2box.it

2BOX with Jump Racing Team in the Italian MotoCross Championship